Called Manipura in Sanskrit, Solar Plexus Chakra is the third chakra in our body’s energy chakra system. This spinning energy center is the hub of motivation and strength.

In common parlance, we call it the “fire in the belly” or the “fire within”. It relates to the inner drive, passion, vitality, and emotional stamina that inspires and pushes us to chase our dreams.

Some of the major organs lie in this region such as the stomach, liver, gallbladder, and spleen. This makes the well-being of the solar plexus chakra vital for the trouble-free functioning of the body.

Its emotional and physical importance makes the solar plexus chakra prone to frequent blockages. Regular upkeep is needed to help it perform its role well for the overall growth and well-being.

This article details how to maintain the solar plexus chakra in good order. Here you will find ways to deal with a blocked or imbalanced solar plexus chakra. In particular, how daily repetition of affirmations can help in opening up the chakra.

More about the Solar Plexus Chakra

The presence of so many essential organs in the solar plexus makes the smooth functioning of the chakra crucial for our physical and emotional health. The solar plexus chakra is associated with emotions like self-esteem, confidence, willpower, passion, and focus. 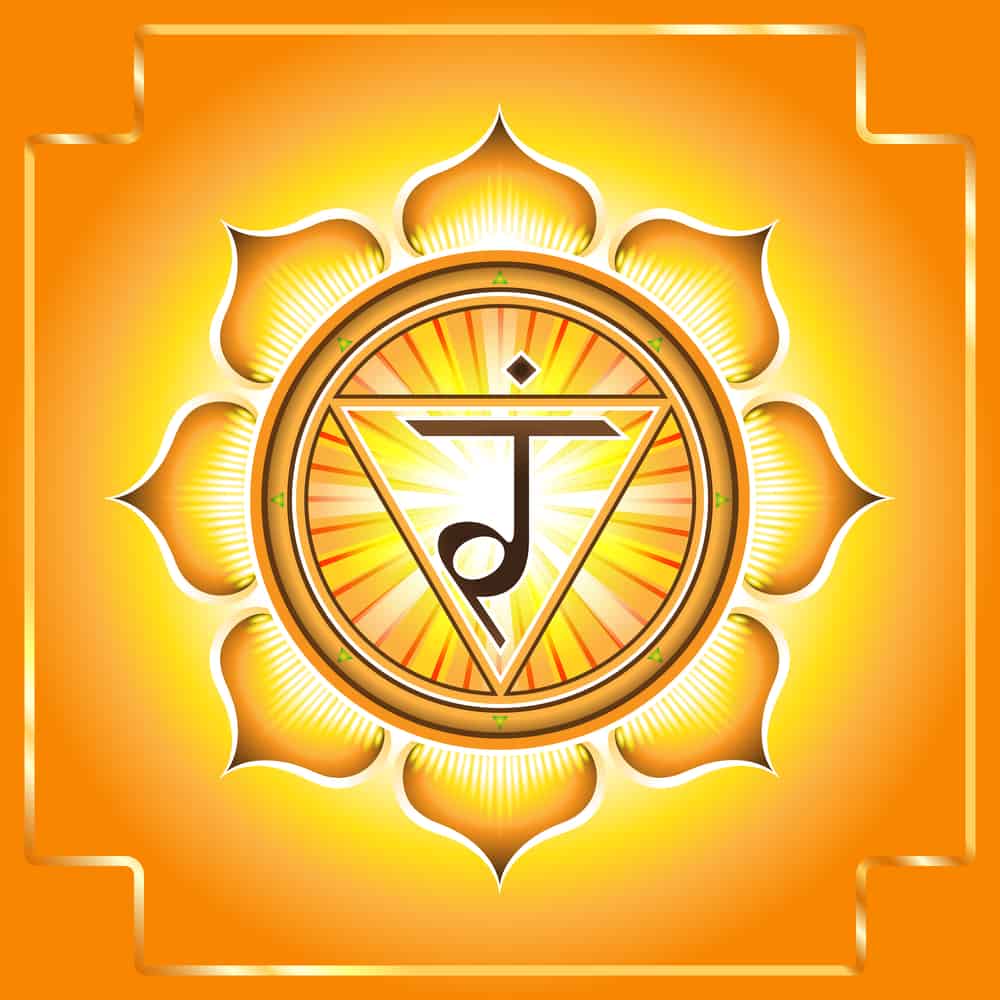 Why does the Solar Plexus Chakra get blocked?

The chakras are spinning wheels of energy centers or energy vortexes. They attract energy in their neighborhood and pass it on to other chakras. Chakras don’t differentiate between the kind of energy they draw in. This means when there is negative energy in the environment, that too gets absorbed into the chakra.

Once negative energy enters a chakra, it stays put there, disrupting the functioning of the chakra. It limits the proper performance of the organs in the area. It also prevents the energy flow within the body, leading to disturbances in other chakras. All these can result in an imbalance of chakras and consequently workings of the organs.

The numerous organs lying in the solar plexus make it predisposed to blockages. The negative energy can enter the chakra through any of these organs. For example, the wrong choice of foods.

How to know that your Solar Plexus Chakra is blocked?

When the solar plexus chakra is blocked, it is evident in the physical and emotional sense. In the emotional plane, it comes out as a lack of confidence or motivation, self-criticism, or inability to stay focused. You would find yourself struggling to deal with anger and define boundaries.

When the chakra is blocked, it can lead to under or overstimulation of the chakra. This translates to indifference and inertia or aggression and hostility. Which form of personality disorder it takes is based on individual traits. At times, the affected individual turns inward or goes overboard spewing venom on others.

Codependency is a typical sign of a blocked solar plexus chakra. The other extremes in the behavioral spectrum such as deception, manipulation, ridiculing and slander are also common enough.

Why is it important to maintain a balanced Solar Plexus Chakra?

A blocked solar plexus chakra can impede the healthy functioning of the organs in the region. And, malfunctioning of one or more organs may result in the disruption of the workings of the body as a whole. And, this can affect your day-to-day life.

The emotional turmoil occurring as a consequence of the chakra blockage can again cause serious repercussions in your daily life. How you live your life and how you deal with the hurdles encountered on your path will help you transform. Irrespective of whether you turn the anger inward or outward, it will destroy your relationships with others.

Now that you know the harmful effects of a blocked solar plexus chakra, it is self-evident that efforts should be made to unblock and regain its balance.

How to regain balance in the Solar Plexus Chakra?

Though the repercussions of a blocked solar plexus chakra are enormous, the ways to rectify the anomaly are simple and easy. A point to note here is to ensure that the problem does not go out of hand. The earlier the intervention to recover the chakra balance, the better. Better still is to maintain the chakra in good health regularly.

Just like other chakras, the solar plexus chakra also has a special color (yellow), specific mantra (Ram), element (fire), and unique crystals and essential oils to boost its functioning. Incorporating them into your daily life can help in maintaining the chakra in good health.

However, when the solar plexus chakra is blocked and out of balance, you need more active intervention to bring it back to normal. Meditation is considered the best activity to make this happen. Unlike regular meditation, chakra meditation involves focusing on the chakra during practice. You may amplify the effect of meditation by chanting the mantra or including crystals or oils.

Regular practice of meditation is a surefire way to keep chakra in good health. However, meditation is not for everyone. Many find it difficult to maintain their focus when their mental abilities are not up to par.

Chakra-specific yoga is a good choice for those who are keen on physical activities. Affirmations offer an easy route to chakra balance. Crystal therapy and aromatherapy can also help you regain balance in the solar plexus chakra.

Affirmations for opening up the Solar Plexus Chakra

Affirmations are positive statements meant to boost your self-belief, self-esteem, and self-confidence. They help in unblocking the chakra by working on the root cause of the problem.

How can positive affirmations help?

Chakra imbalance results in emotional instability. You can work on improving your emotional balance with affirmations. This will ultimately help you to open up the chakra and retrieve its balance.

How to use affirmations for the Solar Plexus Chakra healing?

The ideal way to use chakra affirmations is by repeating them aloud. While doing this, it is important to focus on the affirmations and understand and absorb them. This means setting aside exclusive time for this activity. Setting the atmosphere can help in deriving better results from this exercise. Early morning and late night are the best times for repeating chakra affirmations.

You may also affirm by repeating them in your mind or writing them down in a journal. You may listen to audio or watch a video of the affirmations. You can make them part of the vision board and keep it in a place you frequent. An electronic version of the vision board can be saved on the phone or laptop. The idea is to keep in touch with the affirmations as often as possible for the best results.

The third chakra is associated with personal power, energy, willpower, desire, and self-worth. The affirmations for the solar plexus chakra healing are related to courage, confidence, conviction, motivation, and our ability to stay focused, deal with anger, and set boundaries.