Aren’t we all looking for opportunities to attract more money into our lives in some way or the other? Who would say no to an unexpected windfall?

Many cultures across the world have adopted symbols for attracting abundance and wealth since ancient times. At times using these symbols may not be in agreement with the rest of the beliefs but it is still popular and followed even in these modern times. Maybe that is proof of its success and efficacy as a wealth symbol.

Often these money attraction symbols are part of a religion but are still adopted by those from other religious beliefs because of their power and benefits. Some of them are good luck charms to attract positive things into your life including abundance.

This article will help you understand the various symbols of wealth, and how to use them to gain more wealth.

A picture is worth a thousand words. A picture or a symbol is a visual representation of our desire, in this case, wealth and abundance. It helps to stimulate our imagination and keeps us focused on our goals.

Symbols can open our minds to possibilities and keep them engaged for longer periods. Where words fail to evoke a response, symbols succeed without a doubt. The reason is simple to understand.

Symbols appeal to both the emotional and rational parts of the brain, compelling and energizing them to work together towards the same goal. It is easy to grasp the message conveyed by a symbol and absorb its intention.

Often symbols are closely associated with nature and this adds to their authenticity. Symbols from various religious beliefs come with specific definitions and meanings but can be easily adopted without their religious connotations.

Because even within religion, these symbols are a fluid concept and open to personal interpretation. And this makes even religious symbols appealing and acceptable to people all over the world.

Symbols for wealth and good luck are the most commonly used ones worldwide.

Symbols of wealth and prosperity from around the world 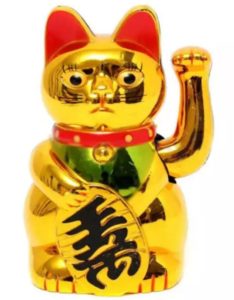 Maneki Neko or the Beckoning Cat is a mascot for attracting abundance and wealth. The cat has its right paw raised as if beckoning money and good luck. Also known as the Fortune Cat, this lucky charm from Japan has been in use since the 17th century.

The cat with its left paw raised is believed to beckon customers. Often Maneki Neko is available with both paws raised. The color of the cat is also significant. While gold is the color for wealth and prosperity, there are Beckoning Cats available in colors like traditional calico, white, black, red, and green.

The cat figurines often can be seen holding something in their paws such as a mallet, fish, prayer tablets, gem, ingots, or one Ryo (ancient coin).

Even though different versions of the cat figurine are used for attracting luck in specific areas, all of them act as lucky charms in the general sense.

Chan Chu or the Money Frog is a popular symbol for attracting money. The three-legged frog has a Chinese coin in its mouth and sits on a pile of more Chinese coins. Also known as Jin Chan or Money Toad, it is a mythical creature that makes its appearance during the full moon. It is believed that its presence will bring good luck and prosperity and chase away bad luck.

Chan Chu is part of the Feng Shui charms for prosperity. According to Feng Shui, Chan Chu figurines should never be placed facing the main door as if it is facing outside. And it should not be kept in the bedroom, bathroom, kitchen, or dining room.

Kubera Yantra is a religious symbol with its roots in Hinduism. It is an intricate geometric pattern etched on a metal plate, usually gold, silver, or copper. According to Indian mythology, Kuber is the demigod of wealth. Being the ruler of the north, Kuber Yantra is to be placed facing the north. Sometimes it is placed on a flat surface or facing the east.

It is believed that keeping Kuber Yantra will bring success and wealth to the owner. 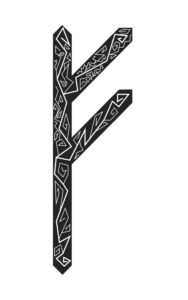 Runes are letters of the runic alphabet that were used to write Germanic languages in ancient times. Fehu rune represents the “f” and “v” sounds in the runic alphabet. Fehu literally translates to “cattle” or “mobile wealth”. In the Nordic traditions, the Fehu rune is often used as a symbol to attract wealth.

The Fehu rune is used in both upright and reversed positions. While the upright Fehu rune is tied to success, abundance, and wealth, the reverse Fehu means failure, delay, and loss of wealth and property.

Oshun is the orisha or deity of the Yoruba tribe of Nigeria. The Orisha of River, Oshun is associated with purity, love, sensuality, and fertility. Believed to be one of the most powerful of orishas, Oshun is given human attributes such as jealousy, vanity, and hatred.

According to mythology, Oshun created life on earth. The orisha is believed to grant wishes to devotees generously. The people of the Yoruba tribe ask her for a variety of things including wealth, health, and more. 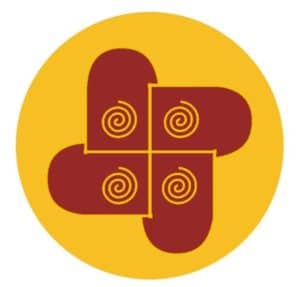 Vasudha is a modified version of the Swastika symbol of Hinduism. It is an alternate Reiki symbol, included in Karuna Reiki as a symbol for prosperity. Karuna Reiki is a Reiki system that helps us learn how to accept, understand, and forgive using various techniques of meditation.

The Vasudha symbol is drawn in red with yellow lines. Swastika forms the core of this symbol. The four arms of the swastika are extended to form closed figures. Each of the four closed sections of the symbol has a spiral inside. This symbol is used for meditation, healing, and attracting wealth.

Lakshmi is the goddess of wealth in Indian mythology and is worshipped for attracting wealth. The goddess sits on a lotus with gold coins flowing from her hand. There are specific mantras and chants to invoke the goddess and invite more prosperity.

Even without the mantras or religious significance, a figurine of Goddess Lakshmi is believed to attract abundance. The coins flowing out of the right hand of the goddess need not mean material wealth alone. It can also mean spiritual wealth. 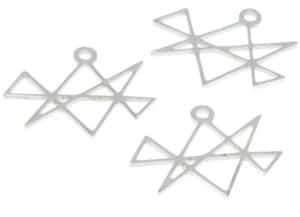 The Midas Star is a non-traditional Reiki symbol for prosperity. It is usually drawn as a green abstracted star with a red line below. It is used not just for attracting money but also for success, harmony, and improving personal relationships. It is believed to help us achieve anything we set our hearts upon.

The green color and the intricate design of the Midas Star are a representation of the idea that wealth and abundance can help a community to develop and preserve the environment. The red line below symbolizes the grounding of energy to attract prosperity.

The power of the symbol of money is invoked by its repeated drawing. It is also made into wearables like rings, pendants, or t-shirts. 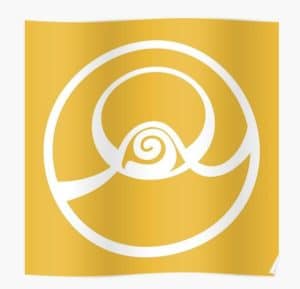 Shefa is Hebrew for abundance. This is a Kabbalist symbol to attract money and wealth. It is considered a powerful tool to create abundance. It is the source of powerful energy. When combined with divine will and intent for the higher good, it can make any of your wishes come true.

Shefa is a circle with a spiral in the center. It is often made into jewelry like pendants and rings.

Salmon has been the staple food of the natives of the Pacific Northwest coast of America. The people of the region believe that salmons are immortal humans living deep under the sea. Ceremonies are held to honor the salmon for having provided them with sustenance and abundance.

In most cultures, there is a belief that bringing good luck into the house can be associated with certain items. While some things are more traditional than others, it’s interesting to note how these objects have been passed down from generation to generation and remain relevant today. That’s the reason we put together this list of 9 things that bring good luck to a house.

Anything that will serve as a reminder of your intention or goal can be an abundance symbol. This is how the ancient symbols of wealth listed above came to represent abundance and wealth. The people of ancient times considered these as powerful symbols of money and they helped them attract abundance into their lives.

These are called symbols for a reason. They represent whatever meaning you assign them. So, if you believe these money symbols have the power to attract abundance and wealth, they will help you get richer.

For more on this topic, see our article cracking the angel numbers for money and prosperity secret.